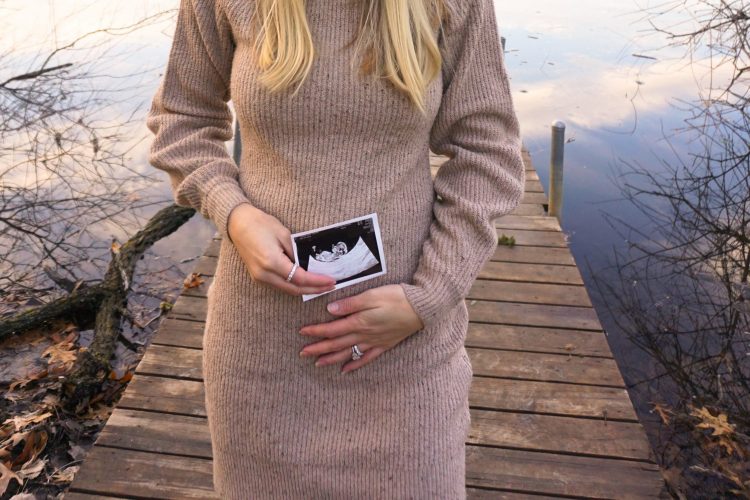 I know those who have been pregnant more than once will agree, but goodness is every pregnancy different! I wanted to give a little bit of an update on this pregnancy and how it’s differed from Eastyn’s. It’s still hard to believe baby number 2 is happening and we’re feeling so blessed (cliche I know, but after a storm a rainbow does come).

For those who don’t know we lost a baby girl, Lena at 13 weeks this June. We had an abnormal ultrasound at 10 weeks, and from there slowly uncovered everything there was to know about this special baby – including a turner’s syndrome diagnosis. It was the hardest thing I’ve personally ever been through and I still think about her daily. Even though we were grieving, within a few months it was hard to not think about wanting to grow our family.

Positive? Are you sure?

I knew that chances of a successful pregnancy was more likely after a cycle and roughly 2 months after my D&C I had my first period. I track my periods within the Ovia Fertility App, and the following month (in September) I was a day late. I didn’t want to read into it too much because I wasn’t sure how regular my cycle would be, so I waited until the second day of my missed period to test. An early detection digital test was what I had so I was hopeful it would be positive if I was, but it was negative. I felt unconvinced, almost like my heart knew I was pregnant. The next day I went to CVS for a few cheap dye tests. The following morning, which was supposedly 4 days into my missed period I tested again. It was negative, I set the test on the back of the toilet and let out a big breath. This was not the month.

At bedtime I went to the bathroom and saw the test on the toilet top. I grabbed it to throw it away but looked again, and it was positive. Positive! Greg was gone on a trip, so I had no one to yell out to  but I immediately broke into tears.  I was incredibly overwhelmed with emotions – happy, scared, excited, nervous, grateful… you name it. I tested again the next day with another digital test and this time, it said pregnant. Whew.

The + Is Just the Beginning

Going through loss changes your look on everything. According to Ovia I was around 5 weeks, I scheduled a pregnancy confirmation appointment for 8 weeks and waited patiently to hear that heartbeat. At the appointment I got to see the tiniest little peanut and hear the 164 heartbeat. It was a huge relief. I was measuring exactly a week behind, so my OB decided to bump me back a week, putting me at 7 weeks.

My next appointment was set for 10 weeks and I won’t lie – those 3 weeks were extremely difficult.

Like most first trimesters, physically they were tolling. My biggest symptoms were fatigue, tummy discomfort and nausea. I joke that this has to be a boy because I just felt (and still do) really really gross all of the time. My skin is terrible- like the worst it’s been in years. That might be a result of my diet of primarily carbs/cheese. Anyways, it’s just part of the journey and I’m here for it!

Beyond the physical demands, emotionally I was so scared of another loss. This was worse than any physical symptom. Every trip to the bathroom I was looking for blood, or if I had a random half day where I felt a lack of symptoms my mind was racing. Loss changes you so much. I still get worried.

When I think about Eastyn’s pregnancy I am so thankful for how blissful and joyful it was. I had no fear, I didn’t know all of the “what if’s”. I know not all women get a pregnancy like that, but I wish we would.

At around 11 weeks my symptoms greatly improved and it was so nice to feel like myself again. We announced earlier than I would have thought but I really needed to say/share this news out loud to others to get out of my mental rut. It helped me almost “accept” that another pregnancy was possible and it was happening! I’ve started to get more active and finally had an appetite for some healthier food. I’d really like this to be as healthy and fit of a pregnancy as Eastyn’s was. But, we will see. I just don’t have the time to focus on myself like I did with EJ. We recently got our Peloton Tread (already have the bike) and it’s been a great alternative for me. I’m still a big “walk on incline” kinda gal but have been doing some jogging too. Bootcamps are my thing because it combines cardio with weight training and I really enjoy lifting. I’m looking forward to getting back into a routine.

I’m definitely giving myself grace which is much easier to do this time around. Everything is expanding faster so it is just going to be different… each pregnancy is, so I’ve heard and now experienced.

Only Possible with Love & Support

I can’t believe I’ve gotten this far along in this post without talking about Greg! I mean, this baby was only possible with his participation ;) lol. He was a huge part of getting me through this first trimester. Greg is incredibly in-tune with emotions and understands the toll that a mental load of negative thoughts can have on me. I’m just grateful for someone like him to welcome another baby and just do life with! I had so much anxiety about welcoming a second babe into our lives, but I…

Toddler Playroom I Before and After

Slowly but surely, we are tackling each room in this house. From the day we…